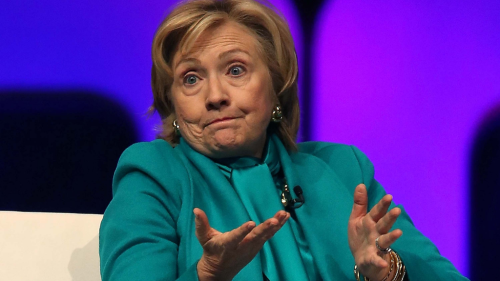 Imagine the following: The IRS sends you, John Q. Citizen, a letter alleging you have not complied with U.S. tax law. In the next paragraph, the tax agency then informs you that it needs a series of personal and business documents. Indeed, it will be sending agents out to discuss your dilemma and collect the necessary records.

But when the IRS agents arrive, you explain to them that you cannot find about 50 percent of the documents requested, and have no idea whether they even exist. You sigh that both hard copies of pertinent information have unfortunately disappeared and hard drives were mysteriously lost.

You nonchalantly add that you smashed your phone, tablet, and computer with a hammer. You volunteer that, of those documents you do have, you had to cut out, blacken or render unreadable about 30 percent of the contents. After all, you have judged that the redacted material either pertains to superfluous and personal matters such as weddings and yoga, or is of such a sensitive nature that its release would endanger your company or business or perhaps even the country at large.

You also keep silent that you have a number of pertinent documents locked up in a safe hidden in your attic unknown to the IRS. Let them find it, you muse. And when the agents question your unilateral decisions over hours of interrogatories, you remark to them on 245 occasions that you have no memory of your acts—or you simply do not have an answer for them.

In some instances, you state things that are not true, cannot be true by any stretch of the imagination, and contradict things you have said in the past—and you make it clear that you don’t think much of such inconsistencies. When pressed with contradictory evidence, you nonchalantly reply that you gave the “least untruthful” answer.

What would happen to you, a typical American citizen, should you follow this current Washington model of erasing, redacting, omitting, forgetting, and lying?

Of course, you are a citizen and so must obey the law. Therefore, you might well find yourself either broke, out on bail, in jail, or mired in endless litigation. But since 2016 we have seen how many high government officials involved in any number of such investigations, were not so much citizens as hyper-citizens above the law, who felt they were not subject to audit. And they were largely right in their assumptions.

Audacious Deletions
Take erasure. Hillary Clinton arbitrarily decided that some 30,000 communications under subpoena were not relevant to FBI inquiries about her illicit email server. So she erased them, or rather “bleached” them electronically to such an extent that they could not be recovered. Some of them, in fact, were likely classified, given even her surviving trove contained classified information. She also had her devices smashed to destroy any electronic footprints.

Again, try all that in a civil suit, and inform a judge that you have determined that electronic messages requested were irrelevant, and so were destroyed.

Investigators on special counsel Robert Mueller’s team arbitrarily announced that months of text communications on FBI phones between FBI employees Lisa Page and Peter Strzok, including critical periods in which Strzok interviewed key persons related to various scandals, were lost, due perhaps to thousands of messages slipping through bureaucratic cracks or to “technical glitches.” That is, the Mueller team apparently determined that texts on the surrendered FBI phones of its fired employees either could not be read for technical reasons, or were erased, purportedly because the Mueller team alone had determined that they found not only nothing of interest to themselves, but also nothing of concern to those who might disagree with them.

Once more, try explaining to a prosecuting attorney or judge that both technological glitches and your own determination of their superfluity explain why requested messages on your phone vanished.

Redacting Into Oblivion, Lying By Omission
Redaction for “national security” purposes now often results in making released documents almost unreadable, given the lacunae. When the FBI finally released over 400-pages related to the October 2016 FISA applications to surveille Carter Page they were so redacted as to become almost meaningless.

Moreover, two essential truths of the FISA application—the Steele dossier, as former deputy FBI director Andrew McCabe had testified, was the chief impetus for the surveillance request (along with news reports in circular fashion based on it), and the dossier was paid for by Hillary Clinton to damage the candidacy of Donald Trump—were obscured by omissions in the applications.

The infamous James Comey memos—the confidential transcripts of supposedly private conversations with the president, written on FBI devices and on FBI time, and deliberately and likely unlawfully leaked by Comey to the press to prompt the appointment of a special prosecutor—are both heavily redacted and full of deliberate omissions. Comey recounts his briefings with Trump on the Steele dossier, but somehow does not inform the president that his own (likely fabricated) information arose from the fact that Hillary Clinton had hired a law firm to hire an investigative firm to hire foreign national Christopher Steel to hire foreign Russian sources to provide supposed dirt on Clinton’s own presidential rival.

We, the public still cannot read the full texts. But apparently Comey passed the supposedly confidential and apparently in some cases classified memos (Comey himself initially wrote on them “secret” and “confidential”), unredacted, to a small circle of friends, who had full access to what was government property, not Comey’s own. Note that Comey promised that he was doing everything he possibly could to limit leaks of confidential information, even as both he and Andrew McCabe were talking to the press, and Comey was soon crafting memos that were by design his insurance policy to be leaked to the media.

As for lying, the litany of top officials in the Justice Department, FBI, and CIA who routinely have not told the truth is now legion. James Clapper, former director of national intelligence, lied under oath to Congress; former CIA director John Brennan did on two occasions. Both have admitted such, as has former FBI Deputy Director Andrew McCabe. James Comey lied by omission by not answering or evading questions asked by Congress under oath—on 245 occasions. His testimonies cannot be reconciled with those of McCabe. He lied by omission by not informing the FISA court the true origins of the Steele dossier—sort of in the fashion of Bruce Ohr who filled out government forms without noting that his own wife worked for GPS on the dossier, while he sought to promote its currency from his office.

The Power Elite Exemption
To this day, we have no idea which officials in government leaked the unmasked names of surveilled Americans to the media, or leaked the transcripts of a conversation between the Russian Ambassador and Gen. Michael Flynn. I say we have no idea, because no one in government has any interest in finding out, because for the few, who might, to do so would earn them media and partisan venom.

The message from the Clinton email scandal, the Mueller investigation, and the careers of Brennan, Clapper, Comey, and McCabe seems to be that if the government wishes a document then do not provide it. If you are finally forced to surrender it, either erase or destroy what you can reasonably get away with hiding. Or barring that, insist that it be heavily redacted, according to your own judgment, for the sake of America. If asked to explain such behavior or allegations of leaking information to the press, either deny or claim faulty memory.

Do all of that and be of the correct political persuasion and of Washington repute, and there is little chance of criminal exposure.

Such exemption so far is the message that we’ve learned from the behavior of high officials of the Obama Justice Department, CIA, FBI and National Security Council. Or put another way, our illustrious government officials are reminding us Americans, “We are better than you.”

About the Author: Victor Davis Hanson
Victor Davis Hanson
Victor Davis Hanson is an American military historian, columnist, former classics professor, and scholar of ancient warfare. He was a professor of classics at California State University, Fresno, and is currently the Martin and Illie Anderson Senior Fellow at Stanford University’s Hoover Institution. He has been a visiting professor at Hillsdale College since 2004. Hanson was awarded the National Humanities Medal in 2007 by President George W. Bush. Hanson is also a farmer (growing raisin grapes on a family farm in Selma, California) and a critic of social trends related to farming and agrarianism. He is the author most recently of The Second World Wars: How the First Global Conflict was Fought and Won (Basic Books).