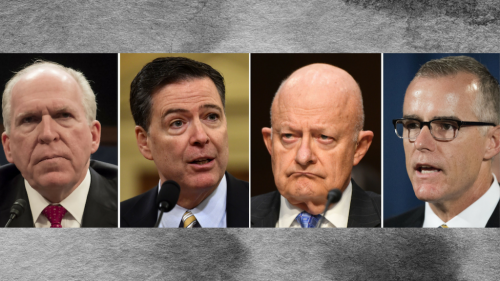 From late 2015 until April 2019, the media, the Left, and the Obama administrative state hierarchy warned us nonstop that candidate, president-elect, and inaugurated President Trump “colluded” with Russia to defeat Hillary Clinton, to assemble a suspect cabinet, and to rule in treasonous fashion in the interests of Vladimir Putin. The former head of the CIA and the director of national intelligence were birthed as permanent analysts at MSNBC and CNN to sermonize—with wink-and-nod assurances that their past billets and security clearances substantiated their authority—that the treasonous Trump would likely be impeached, indicted, or quit.

A mostly progressive team of lawyers, with an unlimited budget, no restrictions on time, and with enormous legal powers found all of that to be a lie.

Unable to find Trump likely guilty of either collusion or obstruction of investigating the non-crime of collusion, they instead salted their report with innuendo and rumor of what the enraged Trump was supposedly thinking about, raging about, and talking about among his closest confidants, including the insurrectionary statement of his press secretary who allegedly sinned by exaggerating the extent of FBI rank and file unhappiness over the firing of James Comey.

All that was a long, slow distraction over real culpability on the part of a number of our supposed best and brightest. And here are some of their most absurd moments from the Orwellian hunt for collusion.

Former Director of National Intelligence James Clapper swore under the oath to the House Intelligence Committee that he did not leak the contents of the Steele dossier to the media or disclose to them an intelligence briefing to the newly elected president of the dossier’s contents. When such news accounts were nevertheless reported in the media, a shocked-in-Casablanca Clapper expressed “profound dismay” at such leaks and expressed his regret to President-elect Trump. With furrowed brow and assurance that such unprofessionalism did not come from the “intelligence community,” Clapper elaborated that these unauthorized disclosures were “extremely corrosive and damaging to our national security.”

Later Clapper admitted that he himself had been one of the sources—what James Comey called a “news hook”—of the very “extremely corrosive and damaging” leaks that he had so damned, through passing on information to CNN’s Jake Tapper, et al., Clapper mysteriously was later hired by CNN as a national security analyst.

Fox in the Henhouse
Deputy Attorney General Rod Rosenstein replaced Attorney General Jeff Sessions on all oversight of matters relating to “Russian collusion” on the theory that, unlike Sessions, the Obama-era Justice Department official was nonpartisan, not conflicted, and thus could decide whether to appoint a special counsel, and, if so, whom.

Yet Rosenstein himself had himself signed one of the FISA warrant extensions that continued surveillance of former Trump campaign Carter Page, a fact of some importance to Special Counsel Robert Mueller’s subsequent investigation. Rosenstein, in fact, appointed Mueller, who was a longtime associate who had worked with him on prior investigations. Rosenstein had also drafted the memo justifying Trump’s firing of FBI Director James Comey, which directly led to Mueller’s appointment.

Rosenstein would then meet with Comey’s replacement, acting FBI Director Andrew McCabe, allegedly, to discuss the possibility of removing the elected President Trump on grounds under the 25th Amendment that he was mentally unfit. Rosenstein’s angst, apparently, arose because Trump had taken Rosenstein’s own advice to fire Comey, which had in turn prompted McCabe to launch new investigations, which Rosenstein, again apparently, then sort of joined—in theory then to investigate in circular fashion himself?

A Higher Ego
Fired FBI Director James Comey wrote a book called A Higher Loyalty, with the theme that Comey had always put allegiance to “the Truth” over all careerist and partisan concerns.

Yet Comey signed off on a FISA warrant request without apprising the court that the chief evidence for such a writ was paid for by losing presidential candidate Hillary Clinton. Comey’s own sworn testimony about the dossier to a Senate Judiciary Committee was not consistent with the actual evidence in the dossier presented to the court. Comey also claimed he needed to brief Trump on the dossier because the media was going to publish its contents, when, in fact, it was only Comey’s staged meeting with Trump about the dossier that offered enough official sanction for the dossier to convince Buzzfeed finally to release it.

Yet Comey on FBI time and machines wrote memos memorializing his confidential meetings with President Trump, and then leaked seven of them to the media in order to create enough fury to lead to the appointment of a special counsel.

Despite Comey’s denials, four of the seven memos may well have contained some classified information and thus were probably illegally leaked by Comey, who succeeded in prompting the appointment of a special counsel—his longtime friend Robert Mueller. Yet Comey in his December 2018 congressional testimony, admitted under oath over 200 times that he did not know the answer to the questions asked or did not remember.

Yet Comey’s testimony cannot be reconciled with sworn statements of his own deputy Andrew McCabe. Comey’s real message is not about a higher loyalty, but rather that when one does not tell the truth, one must apparently continue not to tell the truth—at least until the edifice of the aggregate untruth collapses by its own weight.

Collusion Delusion
Robert Mueller investigated a supposed crime of Trump-Russian collusion that early on in his investigation was discovered to hinge on the Christopher Steele dossier, which to this day has had none of its contents verified but lots of its assertions proved impossible or inaccurate.

The mandate of the Mueller investigation was to discover which foreign nationals tried to interfere with the 2016 election, with the help of the Trump campaign, in order to warp its outcome. While the contents of the dossier that prompted his investigation were never substantiated (no sane person believes that Alexander Downer’s happenstance meeting with campaign volunteer George Papadopoulos prompted the entire collusion hoax), its author and sources were very much authenticated: foreign national and British subject Christopher Steele, and Russian anonymous sources whom Steele contacted and may have paid for the information that wound up in the dossier.

In other words, the Mueller investigation failed to find any Trump foreign collusion, but knew that its birth was initiated by the efforts of a foreign agent to work with other foreign sources to alter the 2016 election: real collusion created the Mueller investigation that looked in vain for false collusion. If that seems surreal, then perhaps the real purpose of the investigation soon was to sweep up enough innuendo and dirt on the president and to publish such extraneous allegations as some sort of justification for finding no collusion.

The No Stars
Robert Mueller had to assemble an independent and unbiased special counsel’s legal team, ostensibly to avoid the partisanship of an all-Republican Department of Justice hierarchy investigating the Republican Trump. But Mueller, a Republican, appointed almost all non-Republican lawyers; among them many donors to Hillary Clinton’s 2016 campaign; among them lawyers of the former Obama Justice Department who had been briefed by Bruce Ohr on the contents of the Steele dossier at a time when Fusion GPS and members of Obama Administration were doing their best to seed the gossip mill among the media; and among them a few lawyers who variously had either represented the Clinton Foundation or former Clinton aides or former Obama Administration officials; and among them Lisa Page and Peter Strzok, who earlier had sent each other hundreds of text messages, many of them expressing not just loathing of the object of their investigation, but also vows to ensure that Trump would not become president.

In the end, the “dream team” and “all stars” spent $34 million and 22 months, and wrote over 400 pages to confirm what was self-evident from the outset of this ill-starred inquest: Donald Trump did not “collude” with the Russians to defeat Hillary Clinton; Trump did not impede the nonsensical investigation of absurd charges; and the horde of lawyers who found no crimes were frustrated to the point of including anything in their report they could to embarrass Trump—except the proof of collusion for which they were tasked to find.

Legacies
The Mueller fiasco likely will end any talk of any special counsel investigation for a generation. Eventually, Brennan, Clapper, Comey, and McCabe, along with others, will feel what it is like to have a federal prosecutor leveraging them, but this time about real, not made-up, crimes.

The liberal television media and their administrative state partisan “experts” likely will not gain back their former audiences, who were duped with two years of fabrications dressed up as “the walls are closing in” psychodramatic news. The hard Left, “Impeach Trump!” Democratic presidential field will no longer have an excuse to avoid explaining to the American people their weird agenda: a fundamental transformation of the country antithetical to the visions of the American Founders and likely on every issue opposed by a majority of Americans. And we the people will learn yet again that our best and brightest just may be among our worst and dumbest.

About the Author: Victor Davis Hanson
Victor Davis Hanson
Victor Davis Hanson is an American military historian, columnist, former classics professor, and scholar of ancient warfare. He was a professor of classics at California State University, Fresno, and is currently the Martin and Illie Anderson Senior Fellow at Stanford University’s Hoover Institution. He has been a visiting professor at Hillsdale College since 2004. Hanson was awarded the National Humanities Medal in 2007 by President George W. Bush. Hanson is also a farmer (growing raisin grapes on a family farm in Selma, California) and a critic of social trends related to farming and agrarianism. He is the author most recently of The Second World Wars: How the First Global Conflict was Fought and Won (Basic Books).