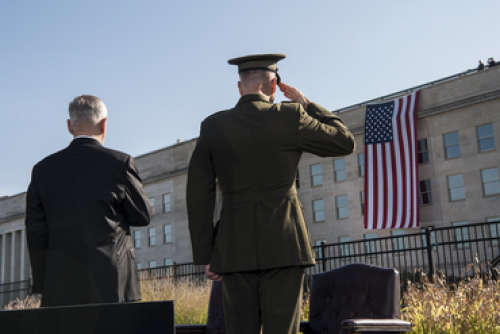 The eighteenth anniversary of 9/11 was marked by the Administration inviting the Taliban to Camp David, and by the resignation and/or firing of John Bolton as National Security Advisor - which two events may not be unconnected. Because really, when the Taliban are running around Camp David, who needs national security?

For the fifteen years after the launch of SteynOnline in 2002, we re-posted every year on this date material of mine from September 11th 2001 and the days we followed. Two years ago, we ceased that policy, for reasons I discussed on Clubland Q&A:

If this is a war, there's no agreement on what we're up against: Terrorism? Islamic terrorism? Islamic extremism? Islam? Whatever it is, a president who, on the campaign trail, mocked his predecessor's inability to use the words "radical Islam" himself eschewed all mention of the I-word today. September 11th 2001 was supposedly "the day everything changed" - if by "everything changed" you mean "the rate of mass Muslim immigration to the west doubled". As that absurd statistic suggests, we are not where I thought we would be 16 years on: We run around fighting for worthless bits of barren sod like Helmand province in Afghanistan, while surrendering day by day some of the most valuable real estate on the planet, such as France and Sweden.

That last point may seem obvious. But, if it is, it's a truth all but entirely unacknowledged by anyone who matters in the western world. I subsequently expanded on it, in a piece we called "The Language of Losing" and which appears to have been succeeded by "The Actions of Losers" - such as inviting the Taliban to Camp David. Hey, why not for the ceremonies in Lower Manhattan? On yet another wretched anniversary I mourn not only the dead of that grim day, but our loss of purpose. All that has changed two years on is that for "sixteenth anniversary" we substitute "eighteenth" - and on and on into the future:

In any war, you have to be able to prioritize: You can't win everything, so where would you rather win? Raqqa or Rotterdam? Kandahar or Cannes? Yet, whenever some guy goes Allahu Akbar on the streets of a western city, the telly pundits generally fall into one of two groups: The left say it's no big deal, and the right say this is why we need more boots on the ground in Syria or Afghanistan. Yesterday President Trump said he was committed to ensuring that terrorists "never again have a safe haven to launch attacks against our country".

By that he means "safe havens" in Afghanistan. But the reason the west's enemies are able to pile up a continuous corpse count in Paris, Nice, Berlin, Brussels, London, Manchester, Copenhagen, Stockholm, Orlando, San Bernadino, Ottawa, Sydney, Barcelona, [Your Town Here] is because they have "safe havens" in France, Germany, Britain, Scandinavia, North America, etc. Which "safe havens" are likely to prove more consequential for the developed world in the years ahead?

To be fair, a lot of the ever increasing restraints on free expression are self-imposed: newspapers decide that it would be "insensitive" to publish certain cartoons, publishers politely decline novels on certain themes, and in Minnesota (where I'll be in a couple of weeks) white progressives agonize that remembering 9/11 is "Islamophobic". Which is weird - because a space alien visiting the United States for Monday's ceremonies would have been stunned to discover that Islam had anything to do with 9/11. As I mentioned yesterday, the President forbore to mention Islam at all: Instead, we were attacked by "horrible, horrible enemies" and "enemies like we've never seen before". Well, we've seen a lot of them since, and they appear to have certain things in common - things that this President was once not shy about mentioning. Yet, insofar as Islam got a look in from officialdom, it was a passing reference in the speech of Defense Secretary "Mad Dog" Mattis:

Maniacs disguised in false religious garb thought by hurting us they could scare us that day.

Well, whoever they are, these "maniacs" can evidently scare grizzled hard men called "Mad Dog" into concluding that, when it comes to mentioning the I-word, discretion is the better part of valor. "False religious garb" means we're back to the standard Euro-squish line that all this Allahu Akbar I'm-ready-for-my-virgins stuff is a "perversion" of the real Islam, which is a peaceful faith practiced by millions of people for whom self-detonation is an unwelcome distraction from traditional activities such as clitoridectomies, honor killings and throwing sodomites off tall buildings. Stop me if you've heard this before, but these "maniacs" are hijacking this "religious garb" in order to peddle a "false" vision of Islam. Foaming-canine-wise, Mad Dog sounds about as mad as, say, Theresa May. I take it that, even in today's politically correct military, you can't earn the epithet "Mad Dog" simply by handing out diversity awards to the Transgender Outreach Liaison Officer of the Month, and General Mattis served honorably and impressively in Afghanistan and Iraq. But, when it comes to strategic clarity, that may be the problem.

In Iraq, everyone's Muslim - mainly because all the Christians got chased out on America's watch. So it's both reasonable and necessary to distinguish between Muslims - between the ones who want to kill you no matter what, and the ones who might be more flexible on that point. I sat in cafés in Rutba and Ramadi and got on well enough with the locals, but I confess I was more circumspect about the clitoridectomy shtick than I am above. Nevertheless, the distinctions one makes in the Sunni Triangle are not useful in the wider world. Old-school imperialists understood this. In 1939, Lieutenant-Colonel Peter Sanders (who was born in Abbotabad, where Osama bin Laden met his end) accepted an invitation to lunch from the Waziri tribesman who'd blown him up and cost him his right arm a week earlier - because, in Waziri terms, this particular tribesman was less worse than many of the others. That kind of unperturbable imperial élan would strike the contemporary world as slightly nutty. But what the Colonel would have found truly nutty is inviting thousands of that Waziri tribesman's relatives to live in England.

In 1980, when a concerned official apprised him of electoral irregularities in certain areas during Zimbabwe's pre-independence election, the Governor Lord Soames (Winston Churchill's son-in-law) scoffed: "Good God, man, this is Africa, not Surrey." The ability to distinguish between Africa (or the Middle East, or the Hindu Kush) and Surrey is vital. General Mattis' line about "maniacs disguised in false religious garb" might be politic or even sincere when advanced in Tikrit or Basra, but delivered at the Pentagon it's the most feeble dissembling 16 years into an existential struggle. And its deployment on 9/11 itself - on the home front, on sacred ground where blood was spilled - is not a small thing. It underlines that, in a profound sense, the dreary endless unwon wars in Afghanistan and elsewhere are not just a peripheral distraction from the real, central front, but an obstacle that prevents even the shrewdest and bravest of men from framing the struggle correctly.

In a sense, we have a hot war and a cold war operating simultaneously. The hot wars are in those bits of barren sod I mentioned yesterday - places where we're tourists with last decade's Baedeker: As one appreciates when looking at all those dodgy chaps John McCain was having his photo taken with a few years back, no one really knows who the good guys are in Syria - and anyway today's good guys all hold that designation conditionally and you've no idea where to look on 'em for the "best by" date. It's like the old 1066 And All That joke about the Irish Question: whenever the English get close to the answer, the Irish change the question. That goes quintuple for the Syrian, Afghan, Yemeni and Libyan questions.

Meanwhile, there's a cold war - the remorseless incremental Islamization of the heart of Christendom. Of course, there were simultaneous hot wars during the last big Cold War, too. But we were more clear-sighted with the Soviets: We understood that Afghanistan was peripheral, and that what mattered was preventing our enemies from hollowing out the free world. Today, the men running this new war think Afghanistan is the be-all and end-all, and that the hollowing out of the free world by the west's enemies is not merely irrelevant but in fact evidence of our moral virtue.

You can't connect what's happening in Molenbeek, Malmö and the other "safe havens" of the west with the "safe havens" of the east if you think what's going on is about random "maniacs" adopting "false religious garb". And until we do make that connection we are doomed to lose.

And incidentally the continuous protestations that hardcore incendiary extremist Islam is an unfortunate aberration would be more persuasive if western politicians ever paid the slightest attention to genuinely moderate voices within Islam. But they don't. They either ignore or consciously marginalize them. Case in point -Yahya Cholil Staquf:

Western politicians should stop telling us that fundamentalism and violence have nothing to do with traditional Islam. That is simply wrong... The approach you describe won't work. If you refuse to acknowledge the existence of a problem, you can't begin to solve it.

He's right. Which is why, 16 years on, we haven't begun to solve it. Maybe in lieu of this year's speakers they could book Mr Staquf for next year's Pentagon ceremony. Or would that be Islamophobic?