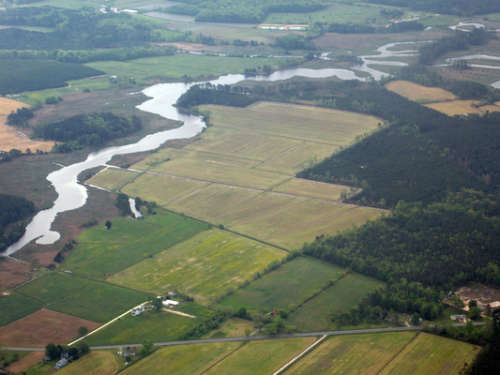 On a business trip in a company plane flying over the mid-west,
I was struck by the straight rows of crops and roads,
compared to rivers and creeks wandering where-ever.

A patch quilt of infinite patterns passes below
etched and scribed by both nature and man
as each wears away at the Earth's ancient features.

Most striking are the contrasts as we soar above;
rivers and rills, nature's merry meanderers
go off in lackadaisical pursuit of gravity,
while man is more direct, sending his furrows
and roadways straight to their abrupt conclusions.

The earth takes on age very slowly, as nature
etches cracks and wrinkles upon the earthen face.
Wind and water erode the ancient newness,
ever-changing, but so imperceptibly as to be
not changed at all when seen by man.

Man is not so deliberate nor so patient,
Having not the time allotment nature has.
He must support his life most diligently,
and make provision for those yet to come.

He must control and try to make peace with the earth,
for the consequences are harsh when nature runs wild,
with the erosion appearing on the faces and minds of men.

The lines scribed by man are straight regular ones
as he goes directly to his task, a highway,
a bridge, a building, or his fields of golden grain.
Man's clock is a mortal one, leaving no time
to dawdle or meander on his way to eternity.